Infection with helminthic invasions is a problem that is quite common in all countries of the world. Almost every third inhabitant of the planet is a carrier of worms, and worms in children are even more common. If we take into account the statistics of only one country, more than two million cases of worms have been registered. But in fact, these figures are much higher, since people often do not seek help from doctors, but try to get rid of worms on their own.

And some of the patients simply do not know about their condition, since the disease is almost asymptomatic. If we draw a parallel between the annual sale of antihelminthic drugs and the population of the country, then there are about 22 million patients, and of which almost 80% are young children.

To date, medicine is known for more than three hundred varieties of worms. Affecting the body, worms, the symptoms of which depend on the type of parasite and the number of penetrated larvae, do not always give a vivid picture indicating the nature of the disease. To suspect a helminth infection, you need to know the signs of worms and their manifestations, which may indicate the introduction of parasites into the child's body. 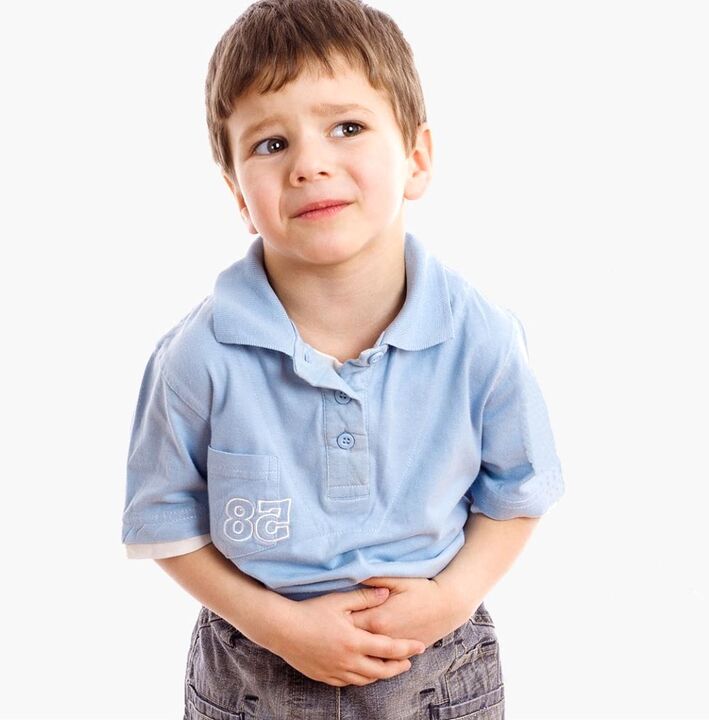 All known worms are usually classified into three main groups, these are:

According to another classification, worms are divided into intestinal and extraintestinal parasites. The first group parasitizes only in the intestinal cavity, the second prefers other organs of the human body, for example, liver, heart, lungs, muscles, brain. Extraintestinal worms have the ability to penetrate the bloodstream, gnawing through the walls of the intestines and blood vessels, and with the blood flow to reach their favorite habitat.

Factors contributing to the infection of children with nematodes

Causes and mechanism of infection of children with worms

Of all the types of worms that can inhabit the human body, nematodes are predominant. Basically, worms in children, whose symptoms are well distinguishable, are pinworms and roundworms, whipworm is much less often diagnosed. Cases of infection with other species make up no more than 3%. This is because flukes and tapeworms are more common in tropical climates, and infestation occurs mainly when visiting countries located in the tropics or subtropical zones.

In addition, since tape parasites are able to withstand quite high temperatures, they are mainly infected by lovers of uncooked or raw meat and fish dishes. And, of course, it is easy to catch worms if sanitary norms and rules of personal hygiene are not followed.

The mechanism of infection with roundworms and pinworms is much simpler, but also more common. Disregard for regular hand washing, careless handling of raw vegetables, herbs and berries. As well as direct contact with stray animals or a carrier of worms.

The pinworm species also has increased reinvasion. This means that re-infection often occurs, which is carried out in this way:

The most dangerous places for infection with roundworms and pinworms are:

There is no escape from the fact that every child in the first years of life tries to taste almost everything. This is a natural process of cognition of the surrounding world. And touching surfaces in crowded places, the baby will certainly pull his hands into his mouth, which will cause the worms to enter the body.

In addition, an incompletely formed children's immune system and weak protective barriers of an immature digestive tract contribute to infection. The only way to reduce the risk of infection is to constantly force your baby to wash their hands, as this can only become a habit in a child by the age of four, and even then not for everyone.

To a large extent, the increased morbidity in children is facilitated by blurred manifestation of symptoms and complex diagnostic methods. The clinical picture of the disease may be unclear, short-term, or absent altogether. Noticing a slight discomfort in a child, few of the parents will suspect worms and immediately consult a doctor. Most will decide that they know enough to independently diagnose and prescribe treatment, which ultimately leads to the widespread spread of parasites and infection of others.

Even the analysis of feces for worm eggs and scraping for enterobiasis does not always give a real picture of the disease. In the feces, helminth eggs can be unevenly located, and in order to capture them, it is necessary to follow the rules for taking material for analysis, which not everyone knows. Scraping can also show a negative result, since females do not lay eggs every day, and to obtain a reliable picture, scraping must be performed at least three times at regular intervals.

Common symptoms and signs of all helminths

The penetration of helminthic invasions into the body is not always accompanied by external symptoms. And in most cases, up to a certain point, a person does not notice the presence of parasites in the body at all. Some types of worms can live inside a person for years without exerting any negative effect on his well-being, and activating their vital activity only under favorable conditions. This could be:

Not so long ago, there was a scientific theory about the effect of worms on the occurrence of many internal diseases. Which, however, did not find the proper support, but was not refuted either.

But today it has been reliably established that each person is the carrier of a certain amount of bacteria, viruses, fungi, including helminths. And parasites do not always behave good-neighborly towards the owner. The constant release of their waste products, which are toxic to humans, gradually leads to a deterioration in the condition and the development of various diseases.

Indicators for suspicion of active activity of worms are symptoms such as:

Small, but very rapidly multiplying and tenacious worms - pinworms, provoke the development of enterobiasis in a child. This is an unpleasant disease, the main symptom of which is severe, unbearable itching in the anus, which intensifies at night.

When a child becomes ill, pinworm eggs quickly spread to surrounding objects, get on toys, clothes, dishes, and everything that the baby touches. Pinworms feel great outside the human body and are able to withstand the effects of many disinfectants. It is guaranteed to destroy pinworm eggs only by boiling and irradiation with ultraviolet rays.

Infection with enterobiasis occurs only through the mouth, when a child takes dirty hands in his mouth or licks infected surfaces. Through the esophagus, pinworms quickly penetrate the intestines and settle there, growing in two weeks into adult sexually mature individuals.

Irritating the skin, pinworms force the skin to be combed, penetrating at this time under the nails, on the skin of the hands, on clothes and bedding. In addition to severe itching, when infected with pinworms, symptoms in children are as follows:

According to statistics from recent surveys, the picture of infection with worms is quite alarming. The results show that more than 80% of preschool children have been infected with various types of worms at least once.

Unfortunately, many parents do not perceive worms as a serious disease and are extremely frivolous about it. But the settled parasites not only deprive the body of the necessary nutrients, but are also capable of infecting many internal organs.

Representatives of such parasites are roundworms, which cause ascariasis, the symptoms of which are much more severe than those of pinworms. Despite the fact that roundworms and pinworms belong to the same class of worms, roundworms can penetrate and cause serious damage not only in the intestines, but also in other organs, for example:

Roundworms enter the body only from the soil, but the provoking factors remain the same as in pinworms, these are:

After entering the body, roundworms adapt for a long time (3 months), mature to mobile larvae, gnaw through the walls of the small intestine and blood vessels, and only then begin their migration to the favorite organs of the human body.

This period is marked by such manifestations as:

And the main symptom of primary ascariasis is skin rash like urticaria, localized on the hands and feet.

The further development of the disease, in which roundworms return back to the intestines, is characterized by such disorders as:

At this stage, against the background of general intoxication, stomatitis and purulent lesions of the skin and mucous membranes often occur. Long-term poisoning with ascaris processing products leads, as a result, to disorders of the nervous system and mental disorders, these are:

As a complication of ascariasis, such severe and dangerous pathologies develop as:

Specific signs of damage by other types of worms

Methods for removing worms in children

The pharmaceutical industry today supplies pharmacies with a variety of antihelminthic agents of various types. These can be targeted or broad-spectrum drugs. Unfortunately, most of them have a long list of negative side effects on the body. Therefore, if worms are found in a child, only a parasitologist should prescribe treatment, after a thorough examination and all the necessary tests.

Moreover, the treatment of most diseases caused by worms requires not only the treatment of worms in children with antihelminthic drugs, but also the appointment of a course of antihistamines, vitamin therapy and probiotics.

Antihistamines are needed to normalize the immune response. Vitamins and probiotics restore the loss of essential acids and normalize the intestinal microflora.

Of the drugs with the least toxic effect, the drug with hexahydropyrazine is isolated. Therefore, it is more often recommended when the question is how to get rid of worms in young children. The drug is specially produced not in tablets, but in the form of a suspension or syrup.

Many parents prefer traditional medicines. Indeed, pumpkin seeds and garlic enemas have an anthelmintic effect and are often used, for example, to treat ascariasis. But their use does not guarantee a complete cure. Therefore, to exclude a relapse, it is better to take a medication prescribed by a doctor and fix the result with any folk anthelmintic drug, otherwise the question of how to remove the worms will be constantly repeated.

Preventive measures against infection with worms

The inevitability of the penetration of worms into the child's body cannot be taken as an axiom. There are a number of rules for the prevention of worms, following which, you can easily protect your baby from this infection: